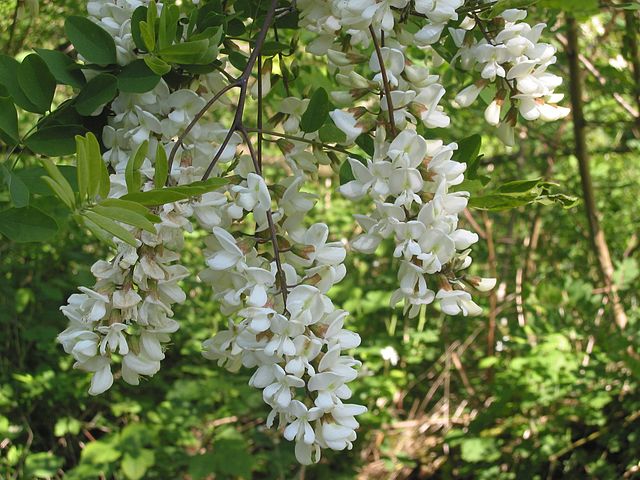 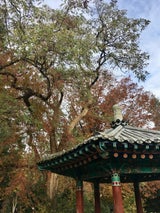 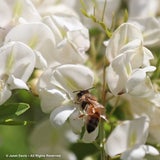 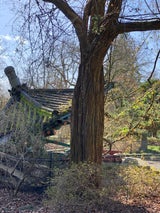 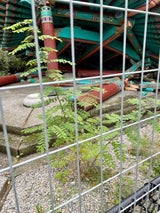 Robinia pseudoacacia is a tall deciduous tree native to the eastern US. It was first identified by early settlers in Virginia and used for construction. It reproduces via insect pollination or suckering. While its long, creamy-white flowers and foliage resemble those of an acacia tree or a locust tree, they are not related. Robinia is in the pea family. It is named after French botanist Jean Robin. In many areas (not here), it is considered very invasive.

Most of these trees in our Garden were planted in the early 1900s as part of the golf course landscaping. Groups of them can be found around the Great Lawn, near Forest Lake, and along 37th Avenue. Unfortunately, many of them have reached the end of their life span and have been removed as they become dangerous. In 2016 a specimen in the Meconopsis Dell was being strangled by Aristolochia manshuriensis, and both had to come out. About that same time, Rosa filipes 'Kiftsgate' was starting to pull down the robinia by the Korean Pavillon, so the climber was moved to the other side of the path. In April of 2021, one of the robinias fell into the Pavillon, but the other remained standing. By October 2021, it was already sending out sprouts next to the ruins (see photo).

A cultivar, R. pseudoacacia 'Frisia', has bright yellow-green foliage and was a Tree of the Month.