ERICA & ERICA'S TREE
​(and a short history of Guiding)

ERICA, ERICA'S TREE (and a short history of Guiding) - June 14, 2018
Erica D was 94 years old on June 26, 2018. She was born in 1924, when Model T Fords were still rolling off the assembly line and before Charles Lindbergh flew the Atlantic. But this story begins fifty years later, one day in 1974, when Erica was reading The Courier and saw an article asking for volunteers to train as Guides at the new Vancouver Botanical Display Garden. She signed up – and the rest is Guide history.

Erica was one of the earliest Guides, joining a year before the Garden officially opened on October 30, 1975. In the early days, Roy Forster, the Garden curator, gave the Guides lectures on botany and horticulture, plus training in the Garden, and then they had to take practical and written tests to qualify as Guides.

When the Guides graduated they were issued with an official Guide kit, consisting of Some Guides carried a Plant Accession List and their own notes; since there were no labels on the plants, the Guides had to be able to identify them. That was no problem for Erica. When she was a little girl, her mother held Open Days in her beautiful garden in Kent and Erica would conduct tours for the visitors using only botanical names for the plants.

As soon as Erica became a Guide, she got involved in many different aspects of guiding. She immediately organized monthly educational speakers for the Guides, the beginning of a tradition which the Guides still enjoy today.

Erica was a member of the original Plant Sale committee. Pam F, one of her oldest friends, remembers: “I first met Erica at a pre-Plant Sale meeting in 1979. Erica ran Trees and Shrubs. What a bundle of energy she was - and still is”.

This year the Plant Sale had its 40th anniversary and in those 40 years, over one million plants were sold, over $1,600,000 was raised for VBGA education programs and approximately 360,000 people have attended the Sale. Erica helped to create this amazing VBGA success story.

In 1986, Erica was the Park Board Volunteer of the Year for “A garden tour with Erica is a delight for her knowledge of plants and plant lore is endless and her enthusiasm for her subject never wanes. She captivates both young and old as she leads them around the Garden. She is a bright spirit and an inspiration to all her fellow volunteers.” (Report on the Award in the Bulletin, January 1987)

In 1998, Erica received an Award of Distinction that acknowledged her writing. Three of Erica’s resource binders are still available in the VanDusen library:
Looking back on her time as a Guide, Erica has one big regret. During the second world war she worked at St. Thomas’ hospital in London, nursing the injured and listening to the bombs dropping on the city, and after the war she trained as a midwife. To this day, Erica says her biggest disappointment as a Guide is that in all the time she spent in the Garden, she was never once called upon to use her training as a midwife!

Through the years, Erica always helped and mentored new guides. Among them was Lolita A, who became Guide Chair from 1991-1993. Lolita has this to say: “Erica is the person who taught me everything about horticulture. I learned taxonomy from her and for more than 20 years since I have known her I remain eternally indebted to her for my botanical awakening. What is remarkable about Erica is her vast knowledge and broad interest. She has a voracious appetite for learning. Her curiosity remains unbridled. She is the quintessential renaissance woman.”

Marina P adds: “Erica visits the library at least once a week come rain, sleet or snow. Nothing stops her. Adorned in her owl-feathered hat, she takes public transportation, and puts crampons over her boots when it is icy. Her simple but profound adventures seem to nourish her soul. I become aware of her presence when I hear her white cane clicking down the hallway. Erica usually bears little gifts such as newspaper clippings or flowers from her garden, but her presence is by far the greatest gift of all. Her stories continually inspire me, and she provides a strong role model for many. I particularly appreciate Erica’s love of plants, her love of people, and her infinite curiosity about both. She is courageous and mischievous, always ready to learn and share, and to live life fully.”

In June, 2018, the Guides adopted a Bollwyller Pear (Sorbopyrus auricularis), an attractive tree planted in 1975 in a prime location overlooking Livingstone Lake. To recognize and thank Erica for the many ways over many years that she contributed to the Guides and the Garden, the Guides are delighted to dedicate this tree to her. 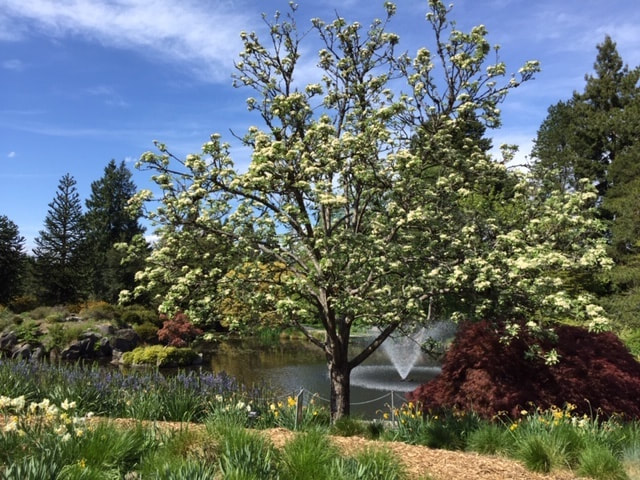