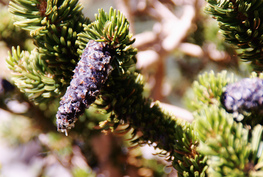 ​Erica's Original Notes
Here, in the area near the lake and the Grotto, we have a different landscape with conglomerate rocks mounded up to create a dry-looking area, sometimes difficult to do in our rainy city! The rocks come from the eastern end of False Creek along Great Northern Way and are gradually disintegrating with the weather and the fingers of curious children. In this area we have several pines, very useful landscape subjects able to withstand severe environmental conditions from semi-desert (Pinus ponderosa) to coastal bog (Pinus contorta var. contorta). They are happy in the poorest of soils as they obtain their nutrients by a mutually beneficial relationship with mycorrhizal fungi in the soil. [updated 2019]

Brooms: sprays were worn as a cognizance for those of the family founded by Geoffrey of Anjou, to which the English Kings, Henry II and Richard II were related, hence their name Plantagenet, Planta genista.

Jasmine: Jasminum nudiflorum is found blooming early in the year on the Broom Bank. It was introduced by Robert Fortune who first saw it blooming in the snow at the Peking Summer Palace.

Fern Grotto: a useful place to study the ferns, planted at shoulder height; easy to study their special way of multiplying, noting the sporangia on the underside of the fronds.

Laburnum:  Laburnum x watereri ‘Vossii’ is the laburnum found in the arched walk; the wood is dense and heavy, and used as an ebony substitute; all parts of this tree are poisonous, not only the seeds. Laburnocytisus 'Adamii' is a graft of broom (Cytisus purpurea) onto a laburnum (L. anagyroides), the result of which can be seen at blooming time, with a mix of colours at the site of the graft. In France there was a mania for grafting in the eighteenth century: potatoes on tomatoes, always, of course, within the same family for the graft to be accepted. In 1825 Dr. Bizarre of Paris grafted a thin-skinned orange onto a thick-skinned one, resulting in Bizarre oranges. Hence the word for anything odd!

Yucca: a striking evergreen member of the Lily family, it is ornamental as well as useful; it is among the world's major fibre-producing plants, being used for ropes, sandals and mats; its fruit goes towards making the drink 'pulque.'

Bristlecone Pine: Update 2013 (LM):  Pinus aristata, Rocky Mountain bristlecone pine (see photo), is native to south-western USA. It has white spots of resin on its needles for which children have nicknamed it the 'Dandruff Pine.' It can live more than a thousand and sometimes even two thousand years.

Its nearly identical close relative Pinus longaeva, ancient pine or bristlecone pine, lacks the white resin spots. Pinus longaeva grows in Great Basin National Park in Nevada and in the White Mountains of California. Some specimens are still standing that started life before the birth of Christ. Pine Alpha was the first one to be dated as older than 4000 years, before Moses led the Jews out of Egypt.  In its native habitat Pinus longaeva is very slow growing, one inch every 100 years. Its high resin content helps preserve it from decay. Because of its longevity, it has been used to recalibrate radiocarbon dating in order to correctly date prehistoric artifacts.