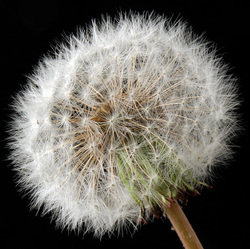 ​Erica's Original Notes
"A weed is a plant whose virtues have yet to be discovered" (Thoreau).  As Thoreau indicated, weeds are usually considered pests, but this is not so; everything in Nature has a purpose!

Uses:
a) they heal over bare soils and give them a protective covering;
b) their deep roots help aerate the soil;
c) they add organic matter when they die;
d) they are a source of food for wildlife and people (dandelion salad);
e) they act as an indicator of soil quality - acidity, sandy, swampy, etc.


Reasons for Success: the flowers are small and self­pollinating, therefore, are not dependent on insects and weather; pollen grains are in large quantities, light and dry and easily dispersed by the wind; seeds are very numerous and long-lived (some are viable five years later, or more, because of a protective seed coat); roots survive even when cut up by a spade. They grow close to the ground and are not, therefore, easily removed by man or grazing animals. They are adaptable, growing in a wide range of habitats, and, finally, some dispense with setting seed and have creeping rhizomes e.g. buttercup.

Apomixy is fertilization without pollinization (possibly due to a hormone), and is found to occur in plants of unstable growing situations, such as the dandelion.

Fall Annuals: their seeds germinate with the fall rains, so that, with the abundant water supply, they keep growing and are ready to rush into flowering and producing seed before the summer drought, such as Collinsia.

Bracken Fern: prevents blood from clotting and destroys animal bone marrow; it has a radiation-like effect, which is the reason it grows unhindered.

Chickweed: Stellaria media, abounds all year round, because it is able to survive cold spells, the older leaves enfolding and protecting the younger ones, rather touching when you think about it! A native of Eurasia.

Creeping Charlie or Wandering Jew: Glecoma hed­eraceae, imported from Europe and said to be used as a tea.

Ground Elder: Aegopodium, or Gout Weed, introduced by the Romans to Britain, because they needed a cure for their aching joints due that damp climate!

Nettles: the older stalks were dried and split for netting in Europe, hence the name. The Romans used the plant to beat their skin, thereby feeling stingingly-warm! Of course, the very young shoots can be eaten like spinach.

St. John's Wort: Klamath, or Goat Weed, was brought to Pennsylvania from Europe in 1793; by 1940 it had ruined a quarter of a million acres of grazing in California alone. It multiplies in the dry season by fine seed and runners, competing successfully with grasses. There are over 200 noxious weeds in North America that have been imported from Europe without their natural enemies.

"To thy fair flower add the rank smell of weeds:
But why thy odour matcheth not thy show,
The soil is this, that thou dost common grow."  From Sonnet 69 (Shakespeare)

The term 'weed' is subjective.  While it may refer to any flower in the wrong place, 'weed' is generally applied to a plant that is considered undesirable, unattractive, or troublesome, especially if it is growing where it is not wanted, like in your garden.

A noxious weed is a plant species that has been designated by an agricultural authority as being harmful to agriculture, horticulture, the natural ecosystem and/or humans, animals and livestock.  Noxious weeds are typically non-native, invasive species that do not have effective insect predators and plant pathogens to keep their growth in check but this term may also include some native species.  Weeds cause crop losses well in excess of $50 million annually in B.C.  Whether native or non-native, noxious or nuisance, weeds and are often either difficult or impossible to eliminate.  Physical removal and plant destruction are preferable to using chemicals to control unwanted plant species.

Weeds can be either annual or perennial and both are difficult to control. Annual weeds tend to be fast growing and tolerant of harsh growth conditions.  They are often early and prolific seed producers and may often complete several life cycles in one season.  Perennial weeds often have long tap roots (dandelions) that enable them to withstand drying or extensive root and stem systems (blackberries & ivy) that enable them to blanket large areas.

What Can You Do?  BE AWARE!

Weeds in Your Garden
​Invasive and/or Noxious Species
Learn about the potential aggressiveness of what you are considering purchasing through mail-order seed catalogues, the Internet and other sources. Awareness is the key to preventing and controlling further losses to B.C.'s biodiversity due to introduction of invasive foreign plant material.
Useful Links