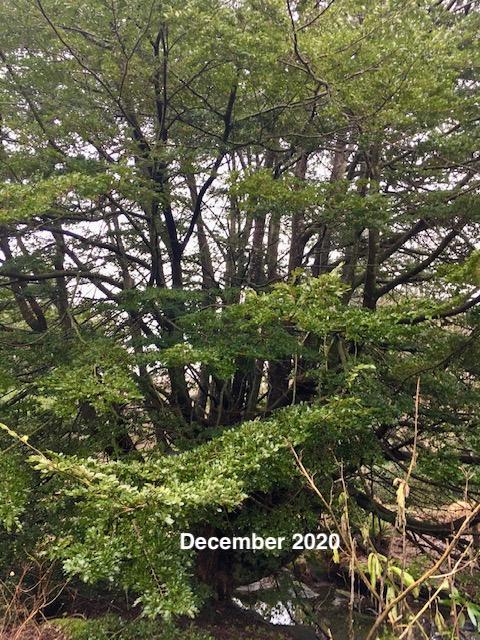 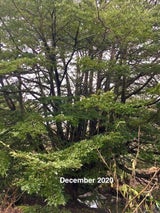 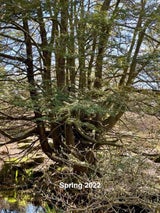 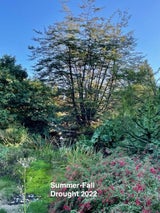 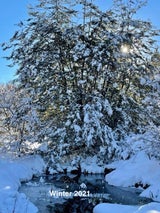 Our Dombey’s southern beech (Nothofagus dombeyi) in the Southern Hemisphere Garden was perfectly planted in 1984. It has been growing beautifully thanks to the water nearby and its sheltered position. One of the first things you notice about this large evergreen tree is its branches. They are flattened horizontally, giving it a stately look.

Native to the temperate broad-leafed forests in Argentina and Chile, it was even growing there in the distant past when the Southern Hemisphere was one continent called Gondwana. This tree has been through millions of years of climate change yet survived. Its small leathery leaves are tough. Some do drop in extreme conditions but grow back again. Lately, episodes of drought have been increasing in these temperate forests. Dombey’s southern beech can grow under many conditions but suffers in extended drought. Researchers have been studying this tree and the effects of drought from the distant past and today. More information.

Another common name for Dombey’s southern beech is Coigüe, which translates as ‘by water’ in the language of the Mapuche. These are the indigenous people who have lived near this tree, watched it, used it, and know its history. Hopefully this tree will survive the droughts in its native areas and always be by water in VanDusen.

The pictures of Coigüe were taken in the Southern Hemisphere Garden throughout the seasons.