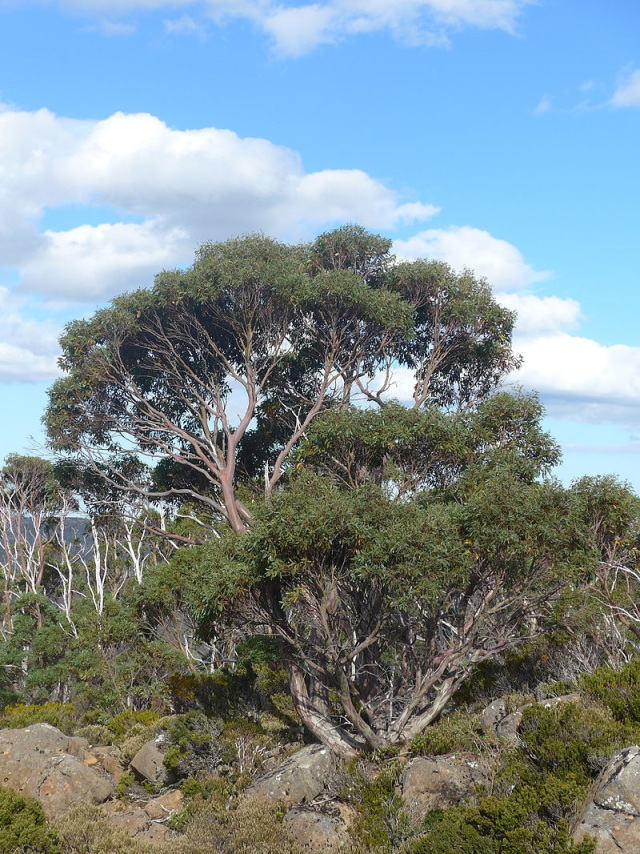 Eucalyptus was brought from Australia to California in 1856, planted as a wind break and soil stabilizer and became naturalized. They are very drought resistant and have no pests (in California). The leaves hang vertically in the heat to avoid the sun (a twisted leaf petiole allows for this); in a forest of eucalypts in Australia, there is, therefore, really no shade. They usually have two types of foliage: juvenile, used in floral arrangements, and adult. An adult Koala will eat two and a half pounds of eucalyptus nightly; there is a narcotic in the leaves, which presumably allows him to have a good sleep during the day, whereas we associate it with cough lozenges, chest rubs and runny noses!

Two eucalypts in our Garden:

Eucalyptus pauciflora subsp. niphophila, the Alpine snow gum, is quite hardy here, and we have two young trees in the Southern Hemisphere Garden.

Eucalyptus coccifera, Tasmanian snow gum. has creamy-white flowers that appear in the summer. These trees were planted fairly recently and were chosen in part for their high tolerance of frost, drought and exposed conditions. Their year-round attractive foliage has a scent similar to peppermint. In a past harsh winter, the Eucalyptus that used to grow here suffered badly from the freezing snow and ice and had to be removed. You may be surprised to know that this part of the Garden is among the second highest in Vancouver, Queen Elizabeth Park being the highest. Hence this exposed area can be susceptible to winter cold, winds and summer heat. February/March 2020 Self-guided Tour, Contributor: Vivien Clarke

More on the genus.