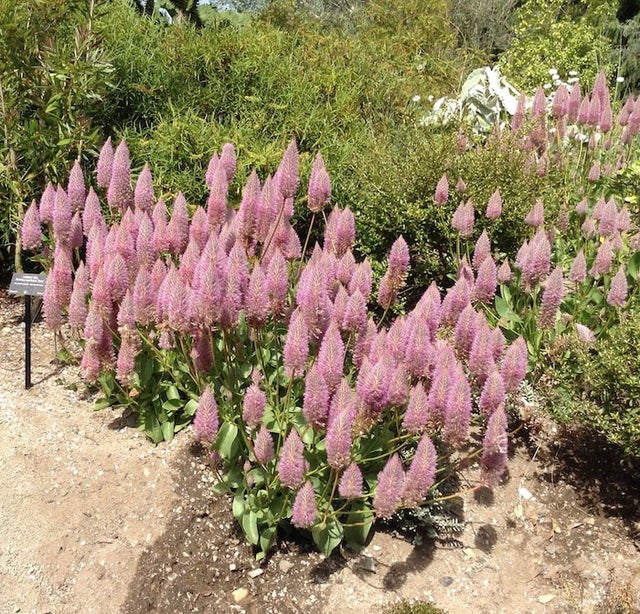 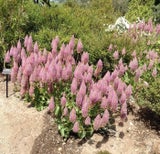 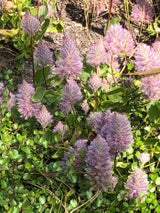 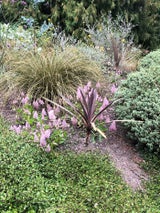 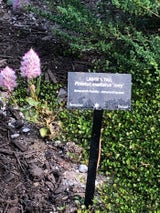 Ptilotus exaltatus 'Joey' is an herbaceous perennial often grown as an annual. It belongs to the Amaranth family (Amaranthaceae). It is said to be similar in appearance to Celosia which is a member of the same family.  P. exaltatus 'Joey' loves it hot and dry. It doesn't like being over-watered or sitting with wet feet. It is ideal for a low-water garden or xeriscape.  Pink mulla-mulla is native to the dry, arid plains of Australia.

P. exaltatus 'Joey' has fat, feathery, bottlebrush-shaped flowers which are a silvery pink in colour. Its flowers are long lasting, and can be used as cut or dried flowers in arrangements. The flowers appear soft and fuzzy, but are actually hard and bristly to the touch. The foliage is silvery-green, thick, and fleshy.

The genus name Ptilotus is from the Greek word 'ptilotos' meaning winged or feathered, referring to the flowers appearing to be like feathers or down. The specific epithet exaltatus is Latin, meaning tall or lofty, and alludes to the way the flower spires grow above the foliage. 'Joey' is a trademark name.

Ptilotus exaltatus 'Joey' can be found in Bed 58C in the Australia and New Zealand Garden.

Text and photos by Kumi Sutcliffe. The photo with the large grouping of flowers was taken in 2015. The others were taken in 2022.