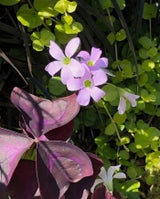 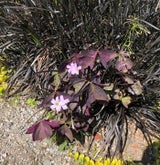 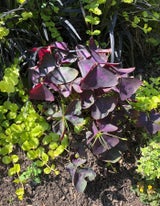 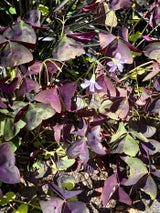 Oxalis triangularis is a low-growing perennial in the wood sorrel family (Oxilidaceae). It is native to the southern parts of South America from Brazil down to Argentina. It can be used as a border plant or an accent plant, and can give a pop of colour to the garden. It is also popular as a house plant.

O. triangularis has dark purple, clover-like leaves. Each leaf consists of three leaflets each triangular in shape. The flowers which are pale pink and star-like in appearance bloom from late spring into summer.  O. triangularis has interesting behaviour. It is highly photonastic. Both the leaves and the flowers open and close in response to light, dark, and even changing weather, opening when light levels are high (in the day) and closing when light levels are low (at night). O. triangularis leaves and flowers are edible, but should only be eaten in moderation due to their oxalic acid content. The corms are also edible.

The photos were taken in the Black and Gold Garden in the summer of 2022. It was a warm, dry summer.