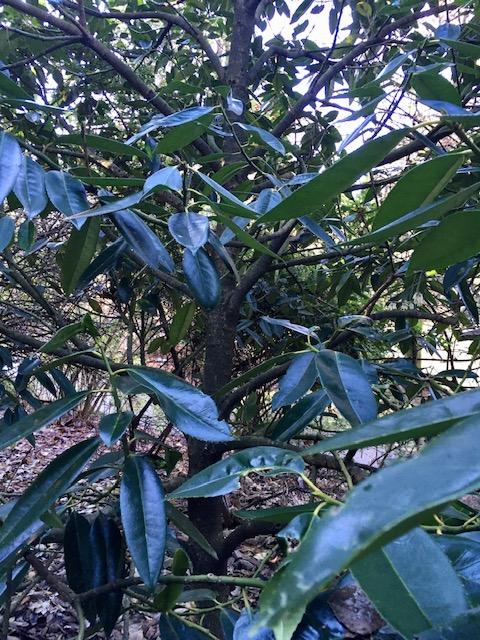 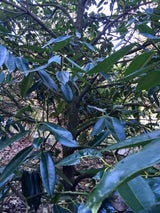 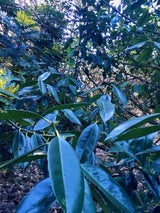 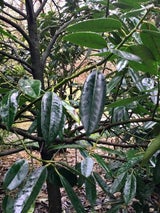 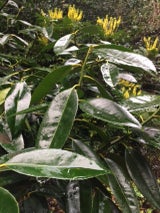 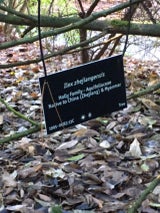 I saw a beautiful holly tree called Ilex zhejiangensis on the trail through the Winter Walk. It was January and the sun was shining giving the foliage a stunning bluish hue. I went back a week later to see how it looked in rain. Still beautiful but this time the leaves had a rain-shine. This small tree, native to China (Zhejiang) and Myanmar, is a rare species of Chinese evergreen holly. It was only formally described in 1999 and is close cousins with the more common horned holly (Ilex cornuta).

Our tree was planted in 1995. It was given to us by the late Peter Wharton, the former curator of the David C. Lam Asian Garden at UBC Botanical Garden. He acquired it from the Hang Zhou Botanical Garden in Zhejiang Province, China. There is very little information on this tree. Then I found a video of Doug Justice talking to a garden club about unusual plants at UBC Botanical Garden. One of them was Ilex zhejiangensis. He said it was known as Ilex latifolia in Japan and sold by a nursery in BC under this name. He even mentioned it could be a great hedge but nobody has the guts to cut it because it is rare.

If you use the name Ilex latifolia, lots of information comes up on this tree.  It even has a common name - lusterleaf holly. And if you look at the pictures taken on the Winter Walk in January, you will see why this is the perfect common name for this small tree.