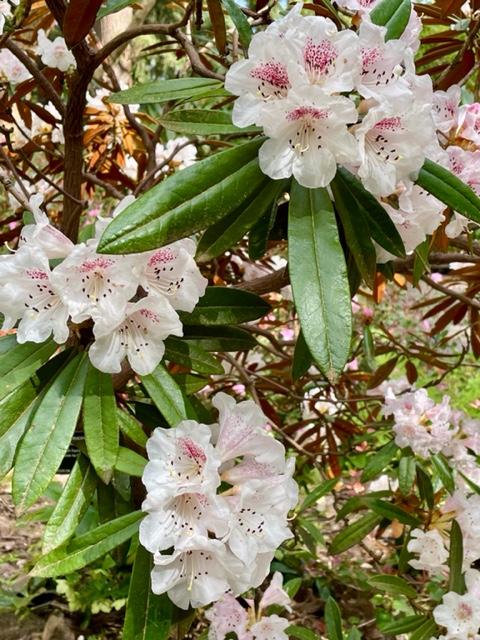 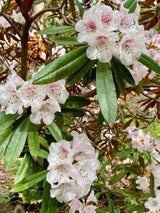 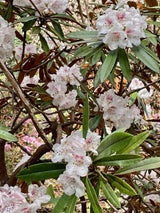 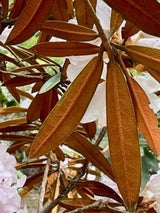 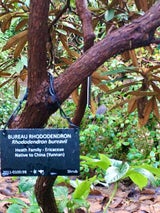 Rhododendron bureavii is known mostly for its handsome year-round foliage. As new growth appears, each leaf is completely covered front and back with white wool like hairs. Tomentum is the term for the coating on the top surface of leaves. It gradually washes off the top surface to expose a glossy leaf. The new white wool on the underside of the leaves (called indumentum) changes to deep cinnamon brown as it ages. More about tomentum and indumentum.

But Bureau rhododendron does have pretty flowers too. They arrive in May - white flowers dotted with maroon red contrasting beautifully with the dark textured trunk and branches. Bureau rhododendron is best planted in light shade. The foliage will scorch in hot, sunny exposures.

This broadleaf evergreen shrub is native to western Yunnan Province in China. It grows up to an altitude of 4,500 m/14,800 ft and can reach a height of 6 m/20 ft. Bureau rhododendron was discovered by Père Delavay in 1896 and named after Edouard Bureau, a French botanist.

The pictures were taken in the Sino-Himalayan Garden in bed 98. The flowering ones are from May and the other two pictures show its January winter form. There is another Bureau rhododendron in the Fern Dell and two more in bed 124.