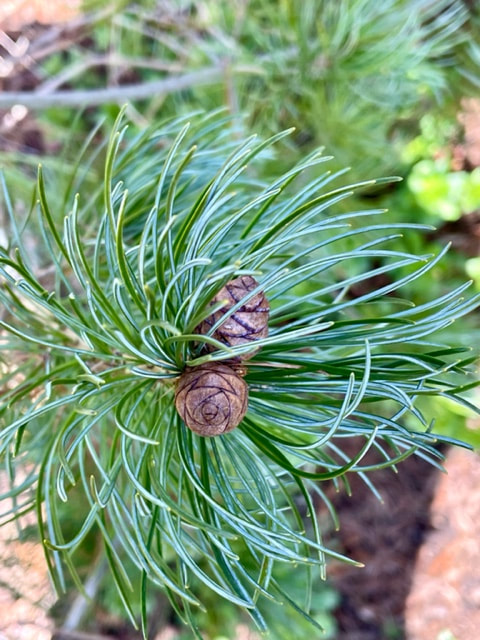 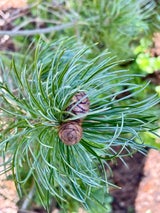 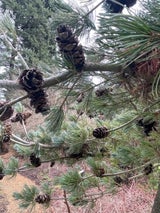 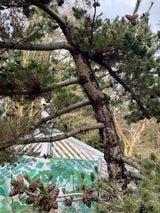 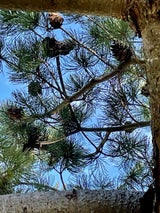 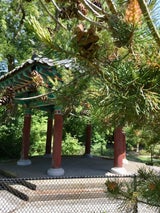 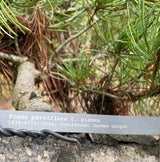 Pinus parviflora is always covered with cones. Any day or any season they are there. This middle-sized conifer is even named for its unusually small seed cones. The specific epithet ‘parviflora’ is Latin for ‘small flower’.

These seed cones grow in clusters crowded on the upper part of new shoots. When mature they are just 8 cm/3 in in length and 3 cm/1 in width. The pollen cones are in clusters of 20 to 30, crowded on the lower part of new shoots. They are red-brown in colour and tiny - 5 mm/.2 in length and 3mm/.12 in width. P. parviflora is commonly called 'Goyo matsu in Japan'. 'Goyo' means ‘five needles’, and 'matsu' means 'pine tree'. All white pines have five needles to a bunch.

Japanese white pine is native to Japan and Ullung Island in Korea. In Japan it is found growing on sunny, rocky slopes at elevations up to 2500 m. P. parviflora has been used in the art of Bonsai for centuries, especially plants selected with shorter-than-typical needles. Those stunted trees high on mountain ledges are a gift to the bonsai world.

2022: The pictures of Japanese white pine were taken in the Korean Garden. In the last picture, it is looking towards the damaged Korean Pavillion knowing it will be gone soon. A Korean Garden will replace it. Life goes on.

Text and photos of the pine cultivar by Hughie Jones