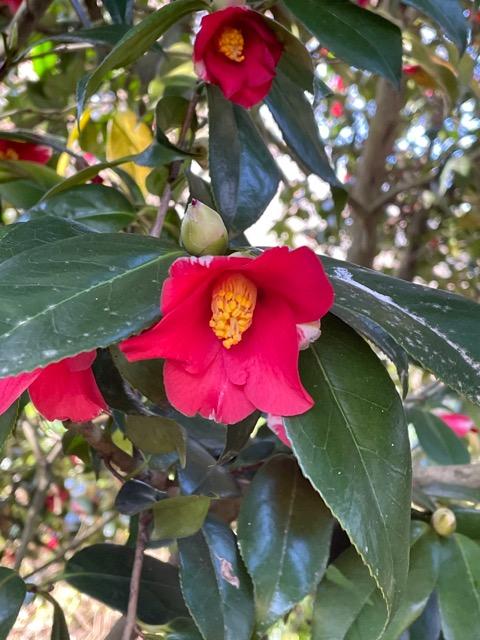 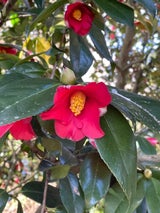 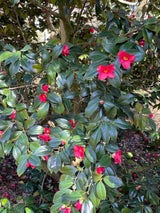 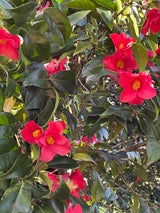 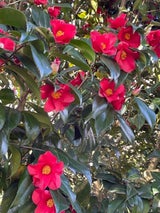 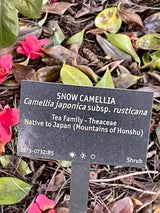 Camellia japonica subsp. rusticana is native to Japan and found in the mountains of Honshu. It grows to a height and spread of 3 m/9 ft. This wild evergreen shrub is covered with snow from December to March. When the snow melts, its single blooms (recurved when fully open) emerge and flower from April to May. They are a rich red with yellow stamens and compliment the glossy green foliage. More about Camellia japonica.

Snow camellia is adapted to heavy snow. It is a spreading bush rather than an erect one. Its branches are extremely pliable, and the leaf stalks (petioles) are short and hairy. In Japan it is known by the common name ‘yuki-tsebaki’ (snow camellia). Tsebaki can also be interpreted as longing or waiting for the red camellia flower, symbolic of love. Or it can be interpreted as a warrior’s or samurai’s bad luck since the camellia flower falls apart all at the same time.

The pictures of snow camellia were taken in the Sino-Himalayan Garden in bed 85 at the beginning of spring.