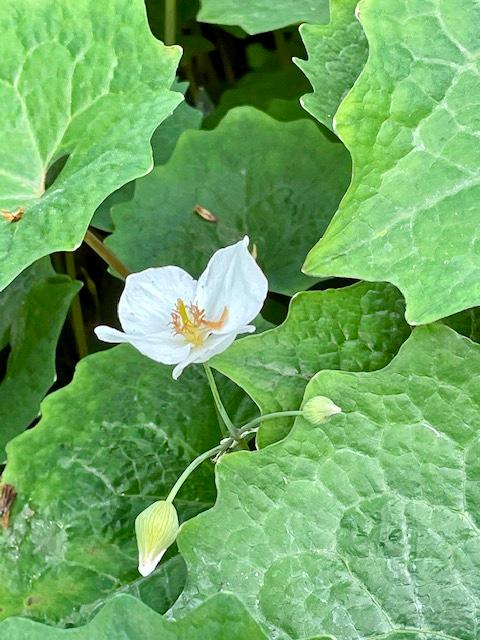 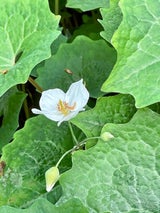 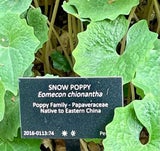 Eomecon chionantha is widespread in eastern temperate China. It grows in woodlands with moist soil and dappled shade. This herbacious perennial has elegant white flowers with yellow stamens. Its small, nodding flowers are on stems held above the leaves and bloom from May to July.

Snow poppy has leaves that stay attractive most of the season. They are basal leaves that rise from the spreading rhizomes on long petioles. And these rounded scalloped leaves are as pretty as the flowers. They look like large wavy-edged hearts.

Eomecon chionantha grows up to 45 cm/18 in and spreads 1 m/3 ft. The genus name comes from the Greek ‘eos’ (dawn) and ‘mekon’ (poppy). The specific epithet is from the Greek ‘chion’ (snow) and ‘anthos’ (flower). Snow poppy is a relative of our bloodroot (Sanguinaria canadensis). Both of them have similar leaves, but snow poppy is the only one in its genus.

The underground components of Eomecon chionantha are another story. Their lengthy stolons (stems growing below soil surface) ooze an orange-red sap when cut. An extract from their rhizome (root stalk) is being looked into by Chinese scientists as a snail or slug bait. The research was begun with a hope of finding a method to control freshwater snails. These snails in Asia, Africa, and South America can carry a parasite that is the second most devastating parasitic disease (Schistosomiasis) after malaria.

The pictures were taken in VanDusen in May in the Sino-Himalayan Garden. The more I looked into the plant, the more I could see both leaf and flower stems rising upwards on a race to the top.