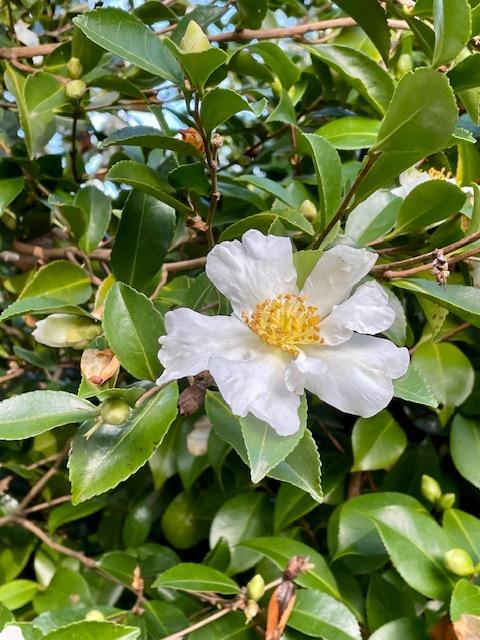 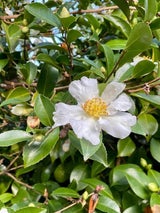 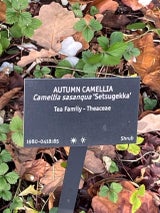 Camellia sasanqua ‘Setsugekka'  is one of the most successful and spectacular of the autumn/winter blooming camellias. This medium-sized evergreen shrub starts blooming in November and doesn’t stop until the end of January. A sight to see with its semi-double pure white flowers and golden stamens. And fragrant flowers too. When the flowers are finished, they fall neatly to the ground - unlike some camellias that hang on to brown mushy flowers that spoil their beauty.

Sasanqua camellias are native to the evergreen coastal forests of southern Japan and were introduced by Dutch traders into Europe in 1869. The Japanese use the leaves of Camellia sasanqua to make tea, and the seeds are pressed into tea seed oil for use as a lubricant and in cooking and cosmetics.

The cultivar name ‘Setsugekka’ is composed of three parts: snow (setsu), moon (getsu), and flowers (ka) and translates as ‘flowers white as snow reflected by the moon’. It is part of an ancient poem - ‘when I see the snow, moon, and flowers, I always think of you.’ Setsugekka’s parentage is unknown but you can see this snow-moon-flower in the Japanese Garden in bed 85.