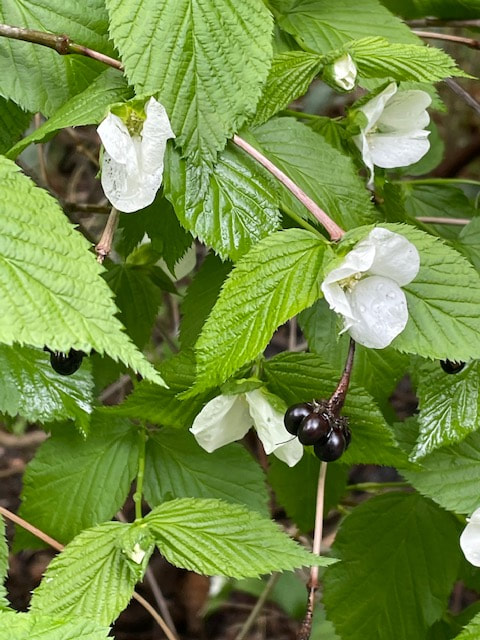 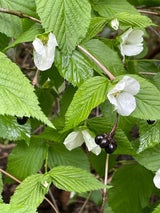 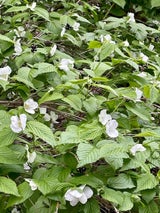 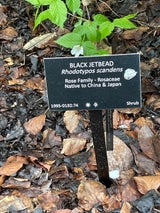 Rhodotypos scandens is a tough but seldom seen ornamental. Although the specific epithet ‘scandens’ indicates this deciduous shrub is a climber, it is more of a spreader. Black jetbead spreads up to 3 m/9 ft by sprawling about and producing basal suckers. It is not fussy and will grow in sun or shade just about anywhere.

Its genus name Rhodotypos is from the Greek ‘rodon’ a rose and ‘typos’ meaning type. It belongs to the Rose family, yet black jetbead is the only four petaled member of this family. All other members have five petals.

This shrub has white flowers that appear in late spring at the end of branches. In fall they are followed by hard black shiny berries in clusters of three or four. These black jetbeads make this often scruffy-looking plant special. The berries persist through winter since there is no pulp to feed the birds. When the flowers bloom in late spring, the black jetbeads are still on the plant. Its leaves are a medium green, ovate and serrate.

Black jetbead is native to China, Japan, and Korea and found in forests on mountain slopes and valleys. Rhodotypos scandens is the sole member of this genus. It should be noted this shrub is an invasive species in parts of eastern North America. Despite being messy and invasive at times, this shrub has the honour of being in the East Garden of the Imperial Palace in Tokyo, Japan. You can find it at VanDusen in bed 74 and 127A in the Sino Himalayan Garden.