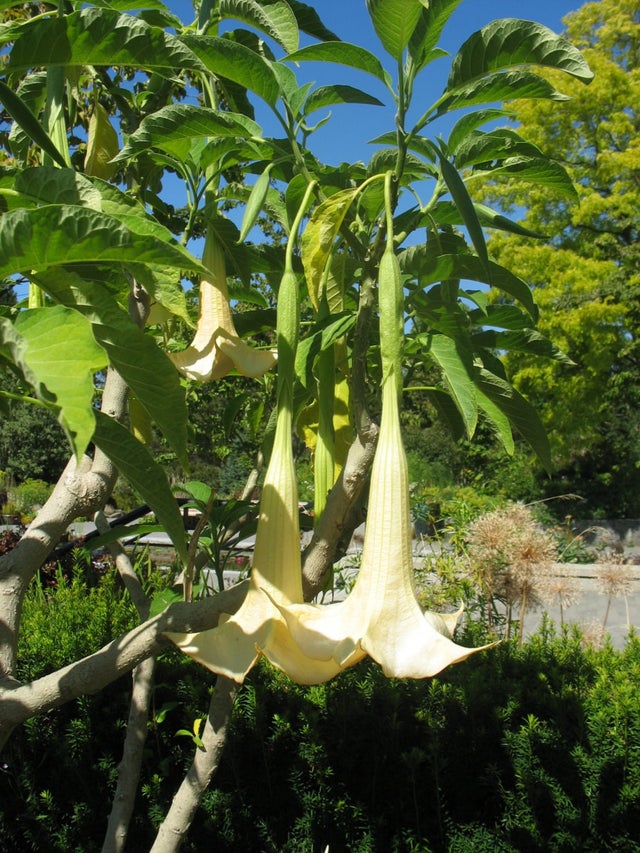 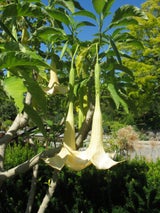 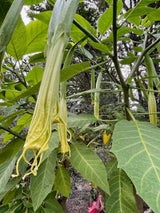 Brugmansia suaveolens is a perennial plant in the deadly nightshade family (Solanaceae). Every part of this plant is toxic. The specific epithet 'suaveolens' means ‘with a sweet fragrance’ but neglects to mention too intense a sniff can knock you out. But the common name covers that - ingesting any part of this shrub or small tree could get the angels blowing trumpets.

Sometimes it is confused with Datura. Brugmansia used to be in the same genus but was separated out in 1973.

Angel’s Trumpet is native to the coastal region of southeast Brazil. It used to grow there in rainforests along river banks and forest margins. Today IUCN considers B. suaveolens to be extinct in the wild. But as long as it is protected from frost, you can grow it. Rich soil and lots of water is what it likes.

Richard Schultes, a prominent plant collector of the twentieth century, did extensive studies of Brugmansia in South America. Schultes was a mentor to our BC ethnobotanist Nancy Turner and is the subject of ‘One River’ by Wade Davis, his former student at Harvard. Schultes reflecting on his experiences with indigenous people: ‘The ethnobotanical researcher must realize that far from being a superior individual, he - the civilized man- is in many respects far inferior.’

More about the genus Brugmansia.