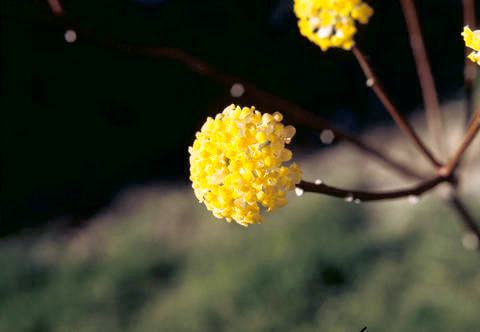 Edgeworthia chrysantha ‘Gold Rush’ is a deciduous shrub native to China, with clusters of small yellow flowers in winter that smell of cloves. Its branches fork sharply, giving it a slightly ungainly habit before it leafs out. Its soft white bark was traditionally prized in Asia for paper-making. It is named for the Irish botanist Michael Pakenham Edgeworth and his half-sister, the novelist Maria Edgeworth. It is closely related to, if not synonymous with, E. papyrifera.

There are a few specimens in the Fern Dell and one a bit hidden along the east fence.