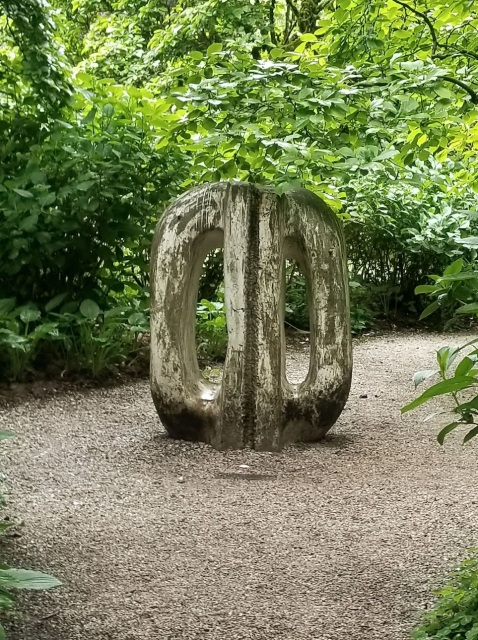 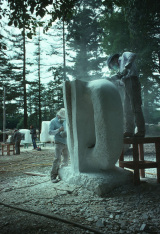 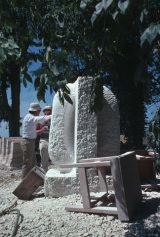 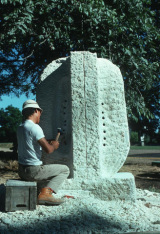 Woman was created in white marble by Kiyoshi Takahashi (1925-1996) who represented Japan at the 1975 Stone Sculpture Symposium. His artist notes about the piece said that stone sculpture should merge with its environment and settle into the ground in which it is placed.

Takahashi was born in Japan and witnessed the destruction of Hiroshima. He became a sculptor, painter and printmaker. In 1955, a major exhibition of Mexican art was held for the first time in Tokyo, which attracted Japanese artists who knew nothing about non-Western art. Takahashi was fascinated by this introduction to pre-Hispanic art and in 1958 visited Mexico where he exhibited his work. In 1962 he was hired by the University of Veracruz to head their Sculpture Department, and he also carved several large pieces for the campus. He fell in love with Mexican culture, and this greatly influenced his work, which combined elements of both Mexican and Japanese aesthetics. In 1969 he returned to Japan to teach at the School of Fine Art but travelled widely (including a summer in Vancouver at the Symposium). His works have found homes all over the world. There is little written about Takahashi in English, but this article in Spanish (use Google translate to read it) shows the variety of his work.

Photo of the artist found at http://discursovisual.net/dvweb17/agora/agofavela.htm