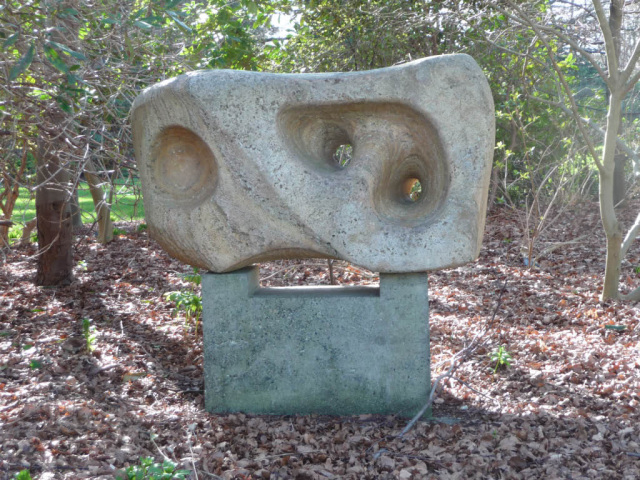 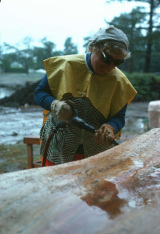 Earth, Sea and Air was created by local sculptor Joan Gambioli (1920-85) in travertine for the 1975 Stone Sculpture Symposium. At the time, she noted that all her work expressed an abiding love for form and material.

Erica wrote, "She wanted to draw attention to a more human scale of affairs; looking through the hole in her lovely sculpture, one can see the high-rises of the downtown area."

Gambioli carved for many years at a large Horseshoe Bay property. She was married to master stone mason Remo Gambioli. In her younger days before this marriage, she was known as Joan Mathews Brandvold and was instrumental in developing the Diamond Head Chalet in Garibaldi Provincial Park.

One of her unfinished works, Dialogue, was completed in 2016 by another sculptor and is installed at John Lawson Park in West Vancouver. The marble remaining on the Horseshoe Bay property was donated by her daughter in 2017 to the City of West Vancouver and is now sitting at Ambleside where it is hoped that future carvers will be able to create new pieces from it.

Main photo by Eve Harrison. Photos of Gambioli working on this piece are from the City of Vancouver Archives.