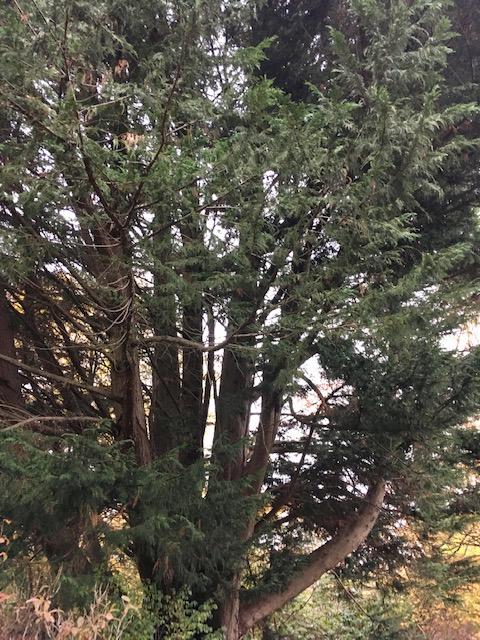 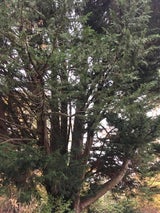 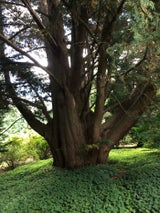 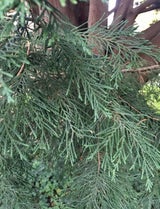 x Cupressocyparis leylandii is on the Great Lawn near the Rhodo Walk and the Hydrangea area in bed 48N. It was planted in 1978 and is a bi-generic hybrid between Monterey cypress (Cupressus macrocarpa) and Nootka false cypress (Chamaecyparis nootkatensis), hence the x at the beginning of the botanic name. Both of these trees are native to the west coast of North America. The genus name of Leyland cypress is a combination of the genus names of the parents. From the Nootka false cypress parent, it inherits its habit, foliage and winter hardiness and from its Monterey cypress parent, its branching pattern and rapid growth.

Leyland cypress can grow one meter a year and can even get as tall as 40 meters. It is a fine specimen tree but has been used a lot for fast growing hedges and screens. It does take well to pruning and shearing yet very quickly gets out of hand, completely shading neighbourhood gardens. So it is not surprising that there has been a lot of lawsuits around it. There has even been a murder - a retired Environment Agency officer was shot dead after an alleged dispute over a leylandii hedge.

The common name and specific epithet honours C.J. Leyland. He first found this hybrid growing on his estate in Wales in 1888. And following the trail of that is another story in itself.

Photos and text by Hughie Jones