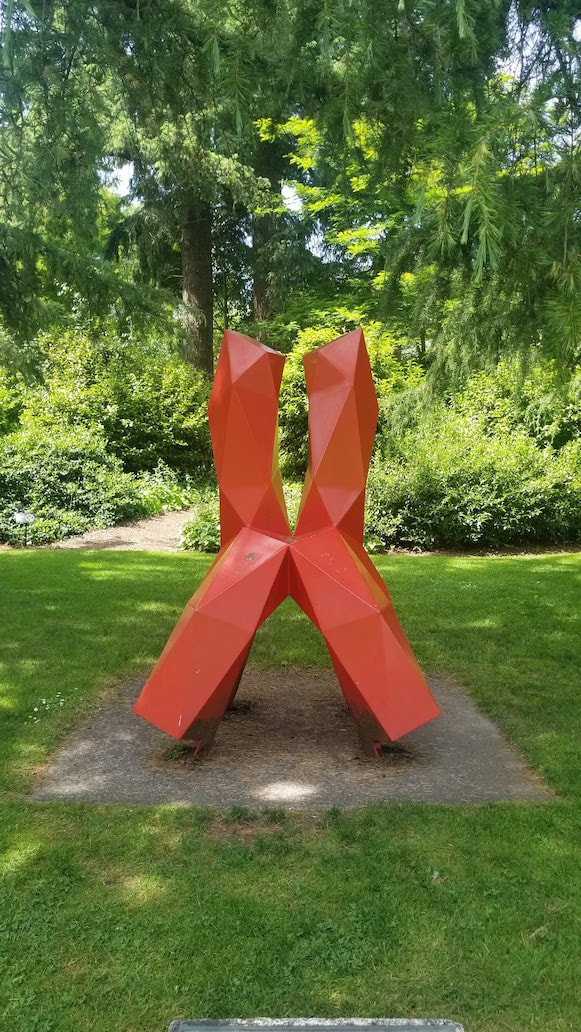 Throne of Nezahualcoyotl, a red steel sculpture, was a gift from the government of Mexico to the people of Vancouver. Roy placed it away from other sculptures so that it would make a big impression. It came into Vancouver lashed to the deck of a Mexican Navy training ship and was dedicated in July, 1978, by the Mexican ambassador. Cadets from the ship, in town to honour the bicentenary of Captain Cook’s voyage, formed an honour guard during the ceremony. The sculpture represents the throne of the wise prince of Tetzcoco, Nezahualcoyotl, a poet and lover of flowers, whose reign from 1418-1463 was a period of great art and culture. Pronunciation of Nezahualcoyotl.

The sculptor, Sebastián (Enrique Carbajal), said that it only took him a month to build the piece and that he is obsessed by geometric shapes. He chose Nezahualcoyotl as a subject because of the prince's passion for flowers and gardens. Sebastián lives in Mexico City and is known internationally for his large works in steel and concrete. He named himself Sebastián after Botticelli's paining of the saint. A close colleague of Vancouver's David Marshall, Sebastián cast some of Marshall's metal pieces. He is also an honorary citizen of Bellingham.

The sculpture was refurbished in 2011 to be part of a temporary show in the garden that year of several more of Sebastián's works.