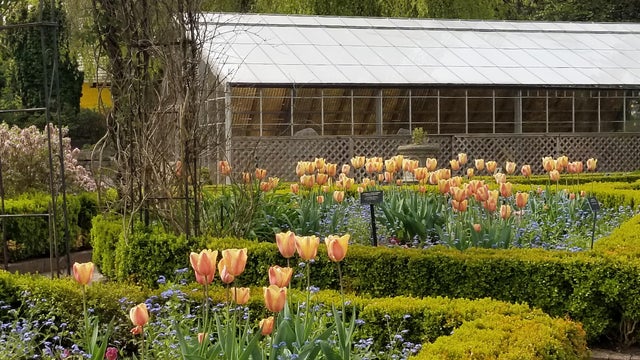 ​The glasshouse at VanDusen was demolished in 2019 due to the structure's instability.

There are some plastic greenhouses in the Garden's service yard, now being used for storage. Plant propagation takes place at Sunset Nursery's greenhouses.

The greenhouse is a northern hemisphere phenomenon which owes its modern development largely to British inventiveness. Its history goes back to early classical times, and to this day you can still see the masonry display shelves of the specularia, as greenhouses were called in Pompeii. These buildings were used for forcing fruit; they were covered with sheets of mica to let in the light and were supplied with hot air flues for warmth.

Greenhouses were very rare after the fall of the Roman Empire but re-emerged in the late 1600s in various forms, such as stove houses, orangeries and conservatories. In the early 19th century, there was a major breakthrough in heating them by the rediscovery that hot water circulated naturally.

Greenhouses were always the prerogative of the wealthy. It wasn't until 1845 when the tax on glass was repealed and the price of glass dropped dramatically that every gentleman simply had to have a greenhouse!

John Evelyn, the 17th century English diarist, coined the words ‘greenhouse’ and ‘conservatory’. They duplicate conditions of a special ecological area because of control of environment (sun, light, heat and water). Maintaining cleanliness is very important as pests multiply rapidly in such an atmosphere.

Reasons for having a greenhouse:

1) to grow unusual and interesting plants that are too tender for our climate;

2) to ripen fruit, such as peaches and tomatoes, early,

3) to grow seeds or cuttings so that the plants they make can mature and bloom earlier.

Our Garden greenhouse is a gift of the local Horticultural Society.

In the Gardens of Adonis there were miniature forcing houses.

Plato, in his dialogue Phaedo, wrote, “A grain of seed or branch of a tree placed therein acquired in eight days development not able to be obtained in many months of open air.”

Caesar Tiberius introduced a utilitarian early covered garden when told by his physician that he needed a cucumber a day to cure an illness. A hole was dug, dung was placed in the bottom, the cucumber was planted, and a lid made of talc or mica was installed.

1295: Albertus Magnus, a German theologian, may have used a greenhouse to entertain William of Holland in the winter in a garden of fruit and flowers maintained by artificial heat.

1684-86: At Versailles, French architect Jules Hardouin-Mansart built an orangerie for Louis XIV with no heat, replacing one built by Le Vau in 1663.

The Chelsea Physick Garden in London had England’s first heated greenhouse, but often the fumes from the stoves killed the plants!

3) Greenhouse/glasshouse: building in which plants are grown where temperature and humidity can be controlled. Usually made of glass or plastic.

4) Conservatory: room having a glass roof and walls attached to a building on one side.