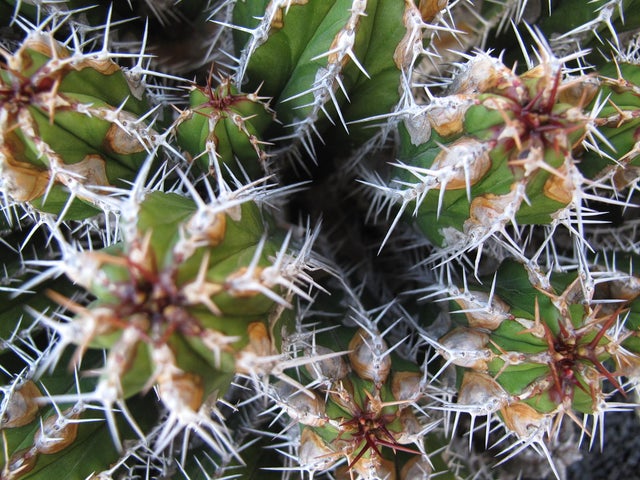 Cacti belong to a very special family of plants found only in the New World (North and South America). Succulents may resemble cacti, having also adapted to desert-like conditions, but there are botanical differences. In most cacti the stems have taken over the function of the leaves, which are rarely present. The stems become enlarged and green in order to store water and make food.

Shade is provided by the convolutions of shape. The spines act as deterrents to herbivores; they also serve as an extra surface from which the plant can absorb moisture and give extra shade.

The Black Garden is home to some unusual succulents. A new Aeonium ‘Colorado’ is often remarked upon by visitors. It is not hardy and overwinters in the greenhouse. Aeonium come from the Canary Islands, and each island has its own variety. Sedum ‘Postman’s Pride’ has a rich dark colour but is leggy from the nursery. It can be cut back and will break freely. All Sedum are hardy. If they flop open, they may need dividing or may be too wet. Some years Sedum have rust due to the wet cold start to the growing season.

"Cactus" by changeable focus is licensed under CC BY 2.0