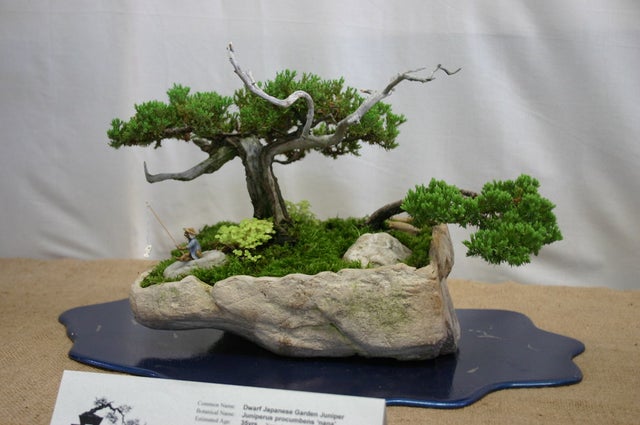 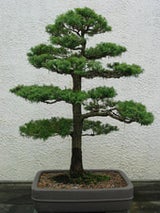 The art form of bonsai, associated with Japan for 1000 years, is based on the even older Chinese art form of penjing. A bonsai plant is often a family's most treasured possession, handed on from father to son. The daily contemplation and care by the Japanese of their bonsai trees enables them to escape their densely populated environment and imagine themselves alone on a mountain peak, in a lonely forest or on a wind-swept shore.

Typical bonsai subjects are many local trees, such as pines, maples, oaks, firs and spruce. Never used are eucalyptus, palms, mountain ash and Western redcedar. Bonsai is a very exacting culture with strict guidelines as to position of the tree, shape and colour of container and needs constant attention, daily watering in the growing season, and no summer holidays!

There are three parts to the bonsai subject: trunk, branches and roots. Girth must balance height, and branches may be used to extend the trunk. Foliage, such as that of Liriodendron, does not always miniaturize. Roots should not be twisted or tangled and are usually to one side. The trunk should be clearly visible from base to first branch, and no branch should extend across it.

There are five general styles, and a single bonsai may have more than one. Styles may be:

Containers must harmonize with subject and style, and, except for cascades, should be two-thirds of greater dimension of tree. Container shapes are round or rectangular for cascading, oval or rectangular for upright and off centre planting, rectangular and large oval for group planting. Pines should have containers of unglazed earth colours, autumn colours, plain green or whitened.

Growth is controlled by nipping and pruning; if there is need to shorten the branch, the bark is peeled back and the branch is left to die naturally; roots are pruned to encourage new feeder roots. Copper wiring is used for fine control because it is flexible and does not rust; no water should be given to the plant the preceding day in order to render the branches more limber when applying the wire. Soil composition is one-third sand, one-third leaf mould, one-third earth. For planting on rock, cover with peat muck (six parts peat to four of earth). For repotting, have everything ready before starting, and work in light but not sun; water in the evening in hot weather with rain water, and feed weekly with liquid fertilizer in the spring, monthly after flowering and not in the winter. Keep in a lathe house as shelter from direct elements.

Unfortunately, there are no more bonsai at the Garden. In earlier days, the 'hotdog' shack housed them.

The word 'bonsai' comes from 'bon', meaning 'tray' or 'shallow pot', and 'sai', the Japanese word for planting.

Japanese immigrants brought the bonsai tradition to North America, but it only became popular after World War II.

Bonsai are not genetically dwarfed plants.