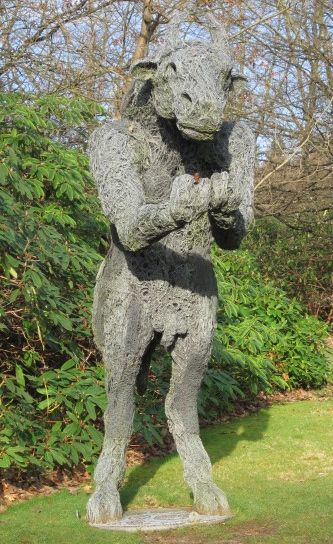 Minotaur and Hare by British sculptor Sophie Ryder was part of the Vancouver Biennale city-wide art show 2009-2011. It was first placed by the Maze but now is located at the entrance to the Loderi rhododendron bed. It is on temporary loan to the Garden and is not part of the permanent art collection.

The sculpture is built from galvanized wire and salvaged material (note the old-fashioned bed springs) on a ceramic base. It was inspired by the myth of the minotaur and originally cradled a small hare in its paws. Unfortunately, the hare was stolen, as was its replacement, so the statue now stands alone.

Occasionally on Canada Day, someone hangs a red maple leaf over its 'genitalia'. Earlier versions of the Minotaur sculpture have been banned in England, but no one seems very bothered by it in Vancouver.