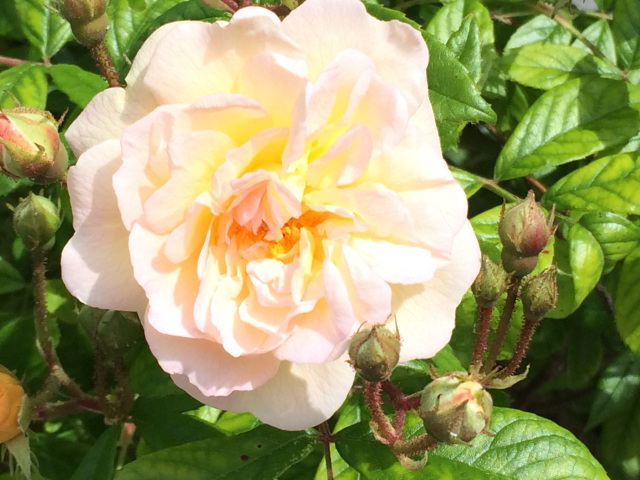 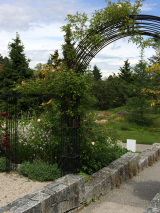 Rosa 'Ghislaine de Féligonde' is a rambling rose that grows over the metal arched trellis at the entrance to the Formal Rose Garden. Its lightly-scented flowers bloom sporadically throughout the summer. The original cutting was donated to the Garden in 2004 by Christine Allen, Killara Farm Roses. She had imported a bare-root R. 'Ghislaine de Féligonde' from Peter Beales Nursery in England and thinks it was the first one in Western Canada. She also shared cuttings with other local growers, and the rose is now easier to find.

R. 'Ghislaine de Féligonde' was released in 1916 by Eugène Turbat, who owned a nursery near Orléans, France. In 2016, the nursery was still owned by the Turbat family, and they held a centennial birthday party for the rose [link is in French].

Most sources state that the rose was named after a French nurse who crossed enemy lines in World War I to rescue her wounded husband, the count de Féligonde. The count was indeed seriously wounded, but his wife's name was Odette. It turns out that the rose was named after de Féligonde's two-year-old daughter, Ghislaine [link is in French]. Later she married a French aviator who was injured during WWII, and the two stories may have gotten confused.