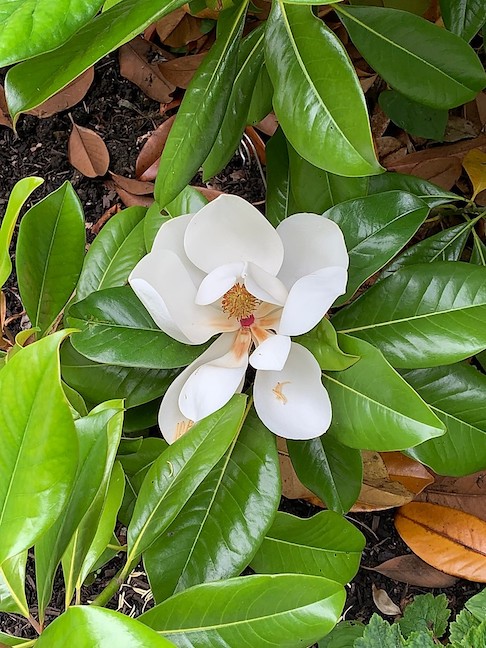 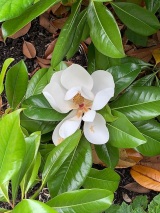 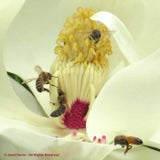 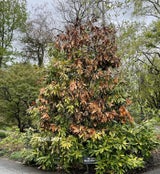 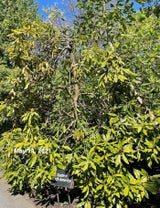 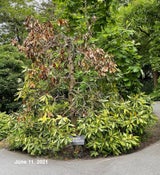 Magnolia grandiflora is an evergreen magnolia.

"Among the tropical-looking, glossy leaves you will see some striking reddish-brown fruits, which split open to release many bright red seeds. Come spring, creamy white, lemony-scented flowers will appear. Although originating in the southeastern United States, this evergreen magnolia survives even our harsher winters. As you walk to the crossroad and turn left, look for deciduous magnolias with their fuzzy, pussy willow-like buds on bare branches. Generally, North American magnolias flower while in leaf, whereas Asian magnolias tend to bloom before leafing-out.  Magnolia is an ancient genus, with fossil evidence of their beetle-pollinated flowers dating back nearly 100 million years."

We have several cultivars in our Garden. 'Victoria' appears to be thriving. However, in the spring of 2021, a lot of dieback suddenly appeared on ‘Monland’ TIMELESS BEAUTY. This may have been a delayed reaction to saltwater run-off from Festival of Lights walkway clearing over the years and perhaps to some dry summers. It was pruned heavily, but there has been more dieback since, and the tree was finally removed mid-summer.