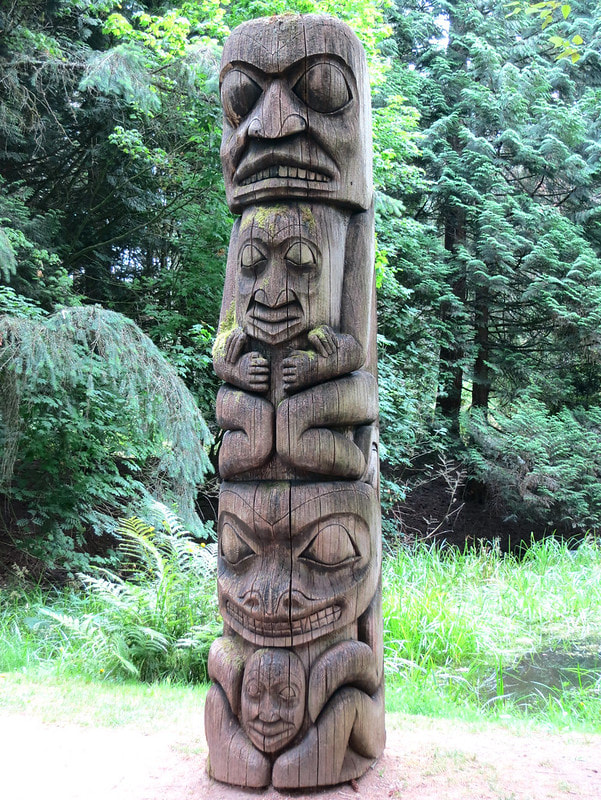 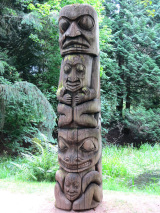 Two story poles highlight the area near Forest Lake. They were originally located at the front entrance to the Garden but were moved in 2012 to their current location.

Al of the Gispudwada (Black Bear Crest Pole of the Killer Whale Tribe) was carved in cedar by Arthur Sterritt.  It was commissioned by the VBGA and unveiled during Habitat 76 in June, 1976. Sterritt is a Gitksan (also spelled Gitxsan) from the Upper Skeena River area. In 2014 he was the recipient of the Stanford Bright Award for his efforts to protect the Great Bear Rainforest.

Mosquito was carved in 1986 by two Gitksan carvers, Earl Muldon (formerly Muldoe) and Brian Muldoe. The pole was commissioned by Walter and Marianne Koerner to commemorate Vancouver's centennial. Muldon received the Order of Canada in 2011 for his cultural contributions. Under his Aboriginal name, Delgamuukw, he was the lead plaintiff in an historic court case which confirmed that Aboriginal rights and title could not be extinguished by the province of British Columbia. It also recognized the validity of oral traditions as a form of legal evidence. More information.

The stories of each pole are explained in detail in a 2019 First Nations Heritage Walk, page 4, as well as the differences between a story pole and a totem pole.

The story poles were attacked by carpenter ants in 2017. While the Garden usually only uses organic pest controls, it had to use something stronger to prevent them from destroying the poles.

Photo of Al of the Gispudwada by Ruth Hartnup.

Photo of Mosquito by Heidi Dobler, City of Vancouver.

1986 photo of Earl Muldon at the Garden from City of Vancouver Archives.