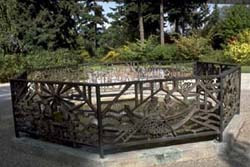 The Swedish Fountain was originally envisioned by Edward Alm who wanted to foster the relationship between Sweden (the land of his birth) and Canada (his home), in memory of Swedish pioneers. The Swedish Folk Society was formed to fund the project, and they raised $50,000. On Mr. Alm’s death, his widow travelled to Sweden and engaged Per Nilsson-Ost to cast it in bronze. Seven panels of the fountain represent the work of the Swedish pioneers. The eighth panel displays a Viking ship, three crowns of Sweden, a dogwood blossom, and totem pole to symbolize the friendship between the two countries.

It was unveiled at the official opening of the Garden in 1975, and Per Nilsson-Ost came from Sweden for the ceremony. Nilsson-Ost appears to have been an important artist in Sweden. A biography was written about him in 1997 in Sweden, but he has left no other trace.

The Fountain was originally installed at the corner of 37th and Oak, and after a number of years the malfunctioning fountain was replaced by a tree, but the panels remained in place until 2012 when someone tried to steal the metal. It was removed for safekeeping. After the government clamped down on metal theft, in 2015 the Fountain was relocated to the Ash Grove, a good place for it because the ash tree is important in Viking mythology.