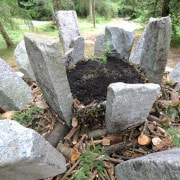 Transformation Plant was created in consultation with elders and key members of the Musqueam people. The artist, Chris Booth from New Zealand, used stones left over from the Stanley Park seawall construction in 1917. Smaller stones were laid flat to make the outside circle, while giant stones more than two metres high were propped upright and angled slightly against stacks of wood wedged between. Much of the wood came from trees in the Garden. During the next 30 years, the big upright stones will slowly open up into a petal shape as the wood rots. “It’s a kinetic piece,” said Booth. “It moves...the greatest recycler on the planet is already in action — fungi, of course.” Booth planted a small cedar in the middle, which will grow as the stones spread out. The work was officially named 'Transformation Plant' by Elders of the Musqueam First Nation in a special blessing ceremony held as part of Opening Night of Earth Art 2012.

Short video about the work.

More about the work from Chris Booth.

2022 Update: The Transformation Plant sculpture has been temporarily fenced off.  Its structure is being reviewed. We hope to have it open again by the end of the summer.