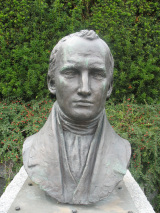 Bronze busts of Archibald Menzies, Carolus Linnaeus, and David Douglas  by Jack Harman (1927-2001) were a gift from Schenley Canada in 1987.  They reside in the Formal Rose Garden.

A prolific sculptor and teacher, Jack Harman established the first large sculpture foundry in Canada in 1973 at a site in North Vancouver, then built a bigger one in Vancouver's Gastown around 1980, which also cast works for Bill Reid and other local artists. While studying art in London earlier, he contributed many covers for romance novels. He received the Order of British Columbia in 1996.

Archibald Menzies was the surgeon/naturalist who accompanied Captain Vancouver on his voyage of discovery along the Pacific Coast. He was also responsible for bringing seeds of the monkey puzzle tree, Araucaria araucana, back to England where they were a big hit in the 19th century and later in North American gardens like ours. The family name 'Menzies' has two different pronunciations. In the spring of 2020, the bust was temporarily removed to be recast by Harman's son. It is the only three-dimensional portrait of Menzies in the world, and a cast of it was made for Castle Menzies in Scotland before being returned to the Garden.

Carolus Linnaeus was a Swedish scientist who developed the modern system for naming organisms.

David Douglas was a Scottish naturalist who identified many plants along the Pacific Coast. He died at age 35 while naturalizing in Hawaii where he fell into a deep pit dug to trap wild bullocks.

Photos of David Douglas bust and plaque by Midge Oke. Triple photo from the City of Vancouver Archives.