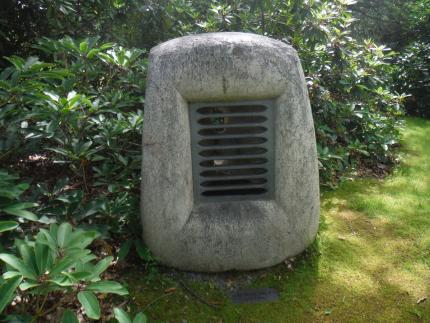 In Memoriam of Teilhard de Chardin

In Memoriam of Teilhard de Chardin by Mathias Heitz of Austria in marble, was created for the Stone Sculpture Symposium in 1975. It was inspired by the the French philosopher-scientist-priest Teilhard de Chardin. Erica noted, ”The black sphere symbolizes the Eternal Mystery, the two side openings represent philosophy and science that shed light on this Mystery, and the sewer grid (serendipitously found on the site) shows that our access to it is barred or limited.”

Little other information is available about Heitz. He appears to have been sculpting by the 1950s and was very involved in setting up a model for international sculpture symposiums, similar to ours. In 1995 a documentary film was made about his career and stated that he was the originator and head of the international sculptors symposium in Lindabrunn, Austria.