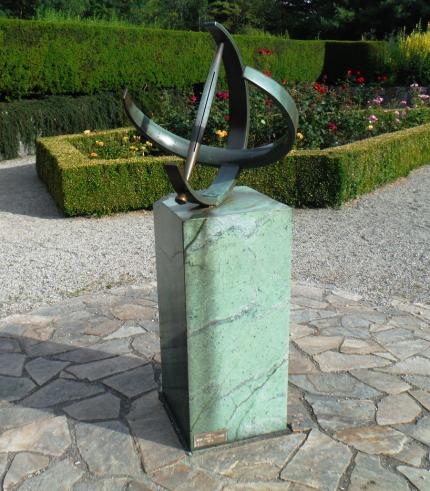 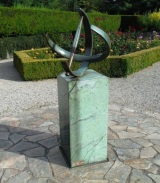 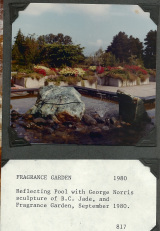 BC is the largest producer and exporter of nephrite jade in the world (there is even a reality TV series, Jade Fever, about jade mining). In Vancouver, Chandler Memorials Ltd. made grave monuments and exported nephrite to China. In the early years of the Garden, they sent us surplus nephrite, which was used to create a number of artworks and provide some of the stones for the Waterfall.

For an excellent history of jade mining in BC, check out Janet Davis' The Paintbox Story posting.

Sundial is in the centre of the Formal Rose Garden and is set to Pacific Daylight Time. Gerhard Class (1924-1997) was the sculptor. It was the gift of Mrs. H. Kitchen in 1976. This was the second edition of a sundial made in 1967 by Class in memory of West End pharmacist George Cunningham, installed at Beach and Denman in Vancouver for many years.

Drinking Fountain by David Backstrom was donated in the late 1970s in memory of Mabel Whiting Young. Mr. Backstrom was a designer with the Vancouver Board of Parks and Recreation, but no other information about him could be found. It sits on the northeast corner of the Bentall Garden.

In the early days of the Garden, a fountain made from a jade boulder by George Norris (who also created The Crab) was located in a reflecting pool at the entry garden (later replaced by the Bentall Garden). It is currently in storage in the upper service yard while the Garden ponders where it should live permanently.