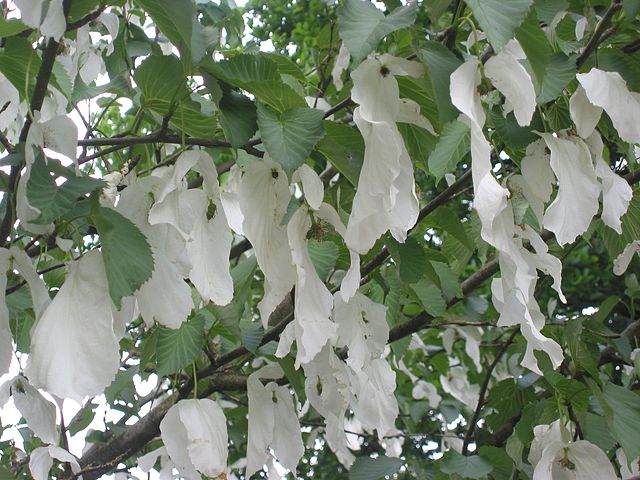 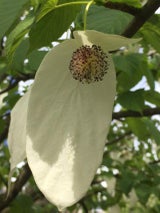 Davidia involucrata has white bracts which flutter in the spring breeze. They surround a small red flower head, then turn green. A few of the flowers get pollinated, then turn into hard green seeds (mostly eaten by squirrels in our Garden).

One Asian visitor recently noted that the tree is frightening when in bloom because white is the colour of death in the Far East. VanDusen has three specimens, the most spectacular of which is found at the eastern end of the Rhodo Walk.

From Erica's notes: Native to China, Davidia involucrata was first reported in the West in 1869 by Father Armand David (known as Père David) and was named after him. Père David was a French missionary who was also a botanist and a zoologist in his spare time. In fact, he was the first Westerner to identify the giant panda. Seeds were gathered from the Davidia and were sent back to France to the Vilmorin nursery, but only one germinated. The British were unaware of this work, and in 1899 Veitch's Nursery sent the young plant explorer Ernest Henry "Chinese" Wilson to China to search for the tree. Wilson worked with Dr. Augustine Henry, a medical officer and customs agent in Yunnan Province and amateur botanist. He furnished Wilson with a map of the whereabouts of this tree, in an area the size of Britain! Wilson's boat was wrecked in the rapids, his opium addict guide was hardly an asset, and it was during the Boxer Revolt, a time of unrest. When Wilson finally arrived, the stump of the tree was found beside a newly-built house! Luckily, all was not lost; he found more trees and collected seed, and the tree was introduced in 1904 in England. D. involucrata is the only member of its genus, but there are two varieties whose leaves differ only slightly. The leaves of D. involucrata var. involucrata have short hairs on their underside, while those of the French variety, D. involucrata var. vilmoriniana are hairless.