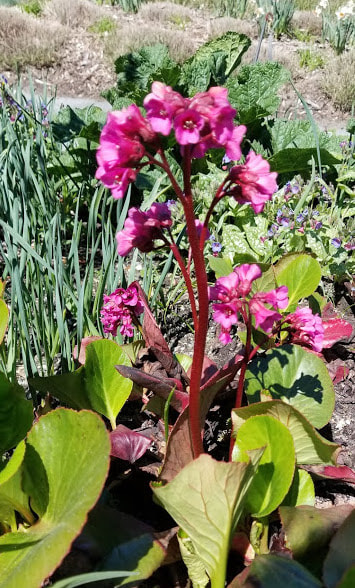 Bergenia cordifolia has deep pink blooms in very early spring, and its shiny leaves turn bronze in the fall.

From Erica's Notebook: Bergenia cordifolia is in the Saxifragaceae family and is known as 'pigsqueak' because of the noise made when rubbing a leaf, useful as a divertissement for adults and children alike! The genus was named after the German botanist and physician Karl August von Bergen in 1794. 'Cordifolia' refers to the heart-shaped leaf. Pronunciation of Bergenia differs in Britain and North America. The Garden features several different culitvars, including B. cordifolia 'Bressingham Beauty' and B. cordifolia [Winter Glow] = 'Winterglut', both of which have maroon leaves in autumn and magenta flowers in the spring.