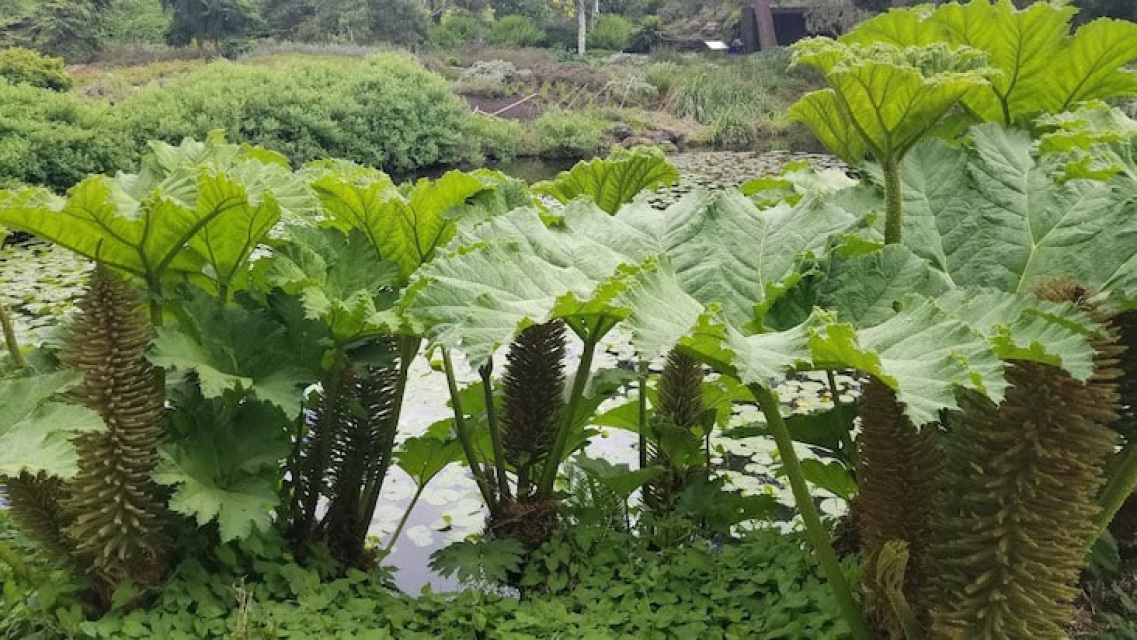 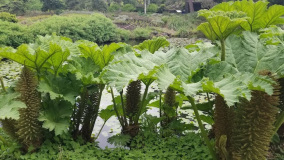 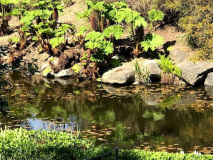 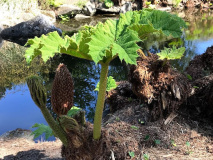 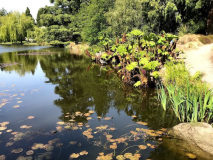 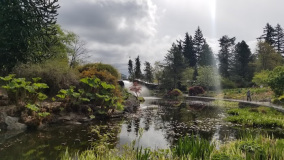 Gunnera manicata's common name, giant rhubarb, is an allusion to the shape of the large,

palmate leaves of cultivated rhubarb but there is no relationship between them. Gunnera manicata is the largest species, its leaves reaching a width of three metres with stalks similar in length.

Gunnera manicata is native to the Serra do Mar mountains of southeastern Brazil. It is a thick, prickly stemmed perennial, producing tiny flowers in dense, cone-like inflorescences in early summer looking like 'a cross between a vast fleshy fir cone and a fertility symbol, on which the small seeds ripen inside bright orange fruits. In Britain and Canada, its dormant buds can be damaged by late-spring frosts so plants are protected from these frosts by a mulch of old leaves from the previous season. The plants grow to their largest in proximity to open water.

In Chile, consumption of the young, peeled petioles of Gunnera tinctoria is reminiscent of rhubarb consumption in Britain and Canada.

Non-edible uses of Gunnera manicata include root tannins being used as a black dye, while the leaves have apparently been used as coverings for roofs and as makeshift umbrellas.

150 million years old, the genus Gunnera was named after the Norwegian Botanist, Johann Ernst Gunnerus (1718-1773), and contains about 40-63 species (depending which reference you read), distributed across much of the southern hemisphere from South America and the Antarctic Islands, through South Africa and Madagascar to New Zealand. Gunnera manicata is the largest species, its leaves reaching a width of three metres with stalks similar in length.

All Gunnera species form a symbiosis with Nostoc punctiforme, a genus of nitrogen-fixing

cyanobacteria. This relationship is the only one of its kind known among angiosperms. The

bacteria, Nostoc punctiforme invades the plant via glands found at the base of each leaf stalk, and initiates an intracellular symbiosis which is thought to provide the plant with fixed nitrogen in exchange for fixed carbon to the bacterium. This interaction is unique in higher plants and may provide insights to allow the creation of novel symbiosis between crop plants and cyanobacteria, allowing growth in areas lacking fixed nitrogen in the soil. (High soil nitrogen is thought to be the explanation of why intercropping with Gunnera macrophylla can produce impressive yield increases in brassicas.)

Nostoc punctiforme is a species of filamentous cyanobacterium. Under non-limiting

nutritional environmental conditions, its filaments are composed of photosynthetic vegetative cells; upon nutrient limitation, some of these cells undergo differentiation into heterocysts, akinetes or hormogonia.

N. punctiforme is one of the Nostoc strains able to maintain diazotrophic symbiosis with higher plants such as the bryophytes Anthocerus punctatus and Blasia pusilla, water ferns from the genus Azolla, the cycads Macrozamia spp., and the angiosperm Gunnera.

Dinosaur Food anyone? Imagine a tasty snack of Manicata Salad! Delicious if you are a hungry Sauropod!