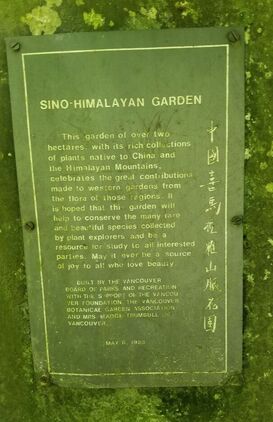 Erica's Original Notes
The garden was opened May 8, 1983, funded by a major city foundation. It is two hectares in size and the second highest spot in the city (after Little Mountain). This part of the Garden brings to mind the mountains of Southwest China and the Himalayas, an area rich in floral treasures which only became known to us in the Western world when China allowed the entry of foreigners. Thanks to the extraordinary courage of early intrepid plant hunters who braved amazing odds, we are able to enjoy what today are our choicest garden trees and plants. In fact, China is known as the ‘Mother of Gardens’.

The Sino-Hiimalayan area is built around a defunct water reservoir, a dramatic, cavernous underground space. Thousands of tons of rock and earth were used to achieve this landscape. Stone is one feature of a traditional Chinese garden. Lightweight rock formations were used to represent the continents rising out of a bed of river stones, as the roof of the empty reservoir would not support heavier features.

​Valleys were made running north to south, sheltered from the cold east winds so as to protect a very special and valuable collection of rhododendrons from Himalayan seed previously kept in another local park.

The Sino-Himalayan Garden is over 2 hectares with its rich collection of plants native to China and the Himalayan Mountains, celebrates the great contributions made to western gardens from the flora of those regions. It is hoped that the garden will help to conserve the many rare and beautiful species collected by plant explorers and be a resource for study for all interested parties. May it ever be a source of joy for all who love beauty.

Additional Information
In 1981 VanDusen’s curator Roy Forster C.M. took part in the first Canadian Botanical Delegation to the People’s Republic of China.  The highlight of the trip was the ascent of Mt. Omei or Omei Shan.  At 3,099m (10,167 ft) it is the highest of the Four Sacred Buddhist Mountains in China’s Sichuan Province.  It was indeed an honour as very few outsiders had been granted permission to make the pilgrimage to the summit over the past decades.  Mt. Omei is known for its high level of endemism (species being native to a single defined zone). To put Mt. Omei’s elevation in perspective – our North Shore mountains are 1,231 m and Mt. Everest. The Sino-Himalayan Plant Collection highlights some of the plants the delegation witnessed in situ.

Many of these plants are found in the two-hectare Sino-Himalayan Garden. The major objective was to provide shelter for the spectacular woody plants of southwestern China and the Himalayas.  The upper slopes of the site were 140 m and very exposed to the elements before work was done.  Roy Forster wrote in his diary “The S. H. Garden is the finest, best ‘thought’ and ‘wrought’ component of the entire Garden.  It has meaning, space, a unified concept, exciting topography and choice of plants that fit the topography”.  He pointed out there are 22 steps – one for every thousand that ascend Omei Shan.