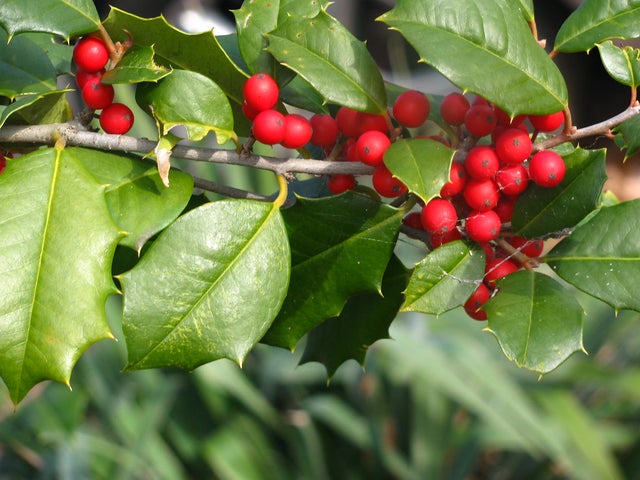 Hollies brighten our dark winter days with their leaves and coloured berries, not all of which are the usual red we associate with holly. (The botanical name Ilex means 'dark tree' in Greek). The holly can be found in both hemispheres and is not always evergreen. Two particularly interesting hollies: one from South America (Ilex paraguayensis) whose leaves are used to make the tea 'yerba mate', containing 6% caffeine; the other was used by Native Indians of the U.S. southwest in pre-battle purification rites and has the appropriate name of Ilex vomitoria!

The colour red, as seen in the berries, denoted in ancient times good or life-giving qualities, and the sharp pointed leaves were an asset in keeping the evil spirits at bay. The Japanese also recommended that holly should be planted by the door of the house for the same reason.

The flowers are usually dioecious, that is to say, the male and female flowers are on separate trees, and it is therefore important to choose a female tree if you want berries. England is home to the holly we associate with Christmas (Ilex aquifolium) with its bright shiny leaves. This holly was crossed with one from the Azores (Ilex perado); this cross resulted in the many vigorous and beautiful hybrids that we have to-day, the Highclere hybrids known as 'altaclarensis'. One would hope that their names might give one some idea of their sex, especially in varieties named King and Queen, but a joker stepped in and one finds that Silver Queen is indeed male while Golden King is female; however, Milkboys are reassuringly male! The native North American holly (Ilex opaca) is much hardier, flowers and therefore berries, being borne on new spring growth, but it has dull green leaves. One last holly of note is Perny's holly, a sparkling little tree named after a French missionary.

We all like odd curiosities, and the one I like best for holly was the holly hedge at Say's Court, home of John Evelyn, the diarist (1620-1706), which was over 400 feet long, nine feet high and five feet wide. It was damaged by a tenant, the Czar of Russia, Peter the Great, who wanted to be near the Deptford naval yards to oversee the building of ships for the Russian navy; he insisted on being pushed through the hedge in a wheelbarrow---a rather masochistic past-time and hard on the poor servant!

NOTES: The wood of holly is very dense and•fine; it is used as inlay, and dyed black as a substitute for ebony. It is very resistant to pollution, and lastly, George Washington in later life sported, if that's the word, false teeth made of holly wood from his own trees at Mt. Vernon.

The former Holly Collection was removed in 2010 to clear the site for the new Visitor Centre which opened in October 2011. Because hollies are an invasive plant in our local forests, the removal of the main collection was in keeping with the Garden’s principles of environmental stewardship. However, several species of holly are still represented in the Garden. Because the fruits of holly are eaten by birds and spread by them, one can minimize their potential invasiveness by only growing male cultivars.

When the Holly Collection was removed (see above), cuttings were taken of all the various holly species and given to the Royal Botanic Garden in Hamilton and to Scott Arboretum of Swarthmore College, Pennsylvania

"holly tree" by nannetteturner is licensed under CC BY 2.0