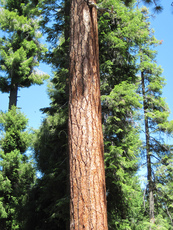 Erica's Original Notes for 'Northwest Pacific Area':
The jade in the fountain comes from Northern BC.

In this area we have a representative group of trees and plants found growing in our province which is rich in varied flora.  The province has nine different biotic zones and seven of the ten forest regions recognized in Canada, from sun­baked deserts to dense coastal forests lush with ferns and deep in salal, where mountains rise to 7,000-10,000 feet, and conditions are similar to those of arctic wastes. In this area the water represents the sea and the buildings the mountain regions.

The Climax Forest consists of hemlock and Western redcedar (Tsuga heterophylla and Thuja plicata). There is no Douglas-fir because it won't grow in its own shade.

2013 Updates (HM): This part of the garden is now known as the 'Western North America Garden', and some parts of it are informally referred to as the 'Cascadia Garden'.

The ravine that forms the heart of the Western North America Garden has been greatly altered by the construction of the new Visitor Centre. This ravine is now part of a system to process rain water and to introduce site runoff into the Garden's lake system and is spanned by the bridge that provides access to the new building. From the bridge, visitors can have a good view of many plants that are native to the Pacific Northwest as well as other plants that are closely related to native species.

Inside the Garden, the ravine has received a lot of new plantings, and it will take a while for things to settle in and naturalize. Closer to the west side of the building, the bed contains Garry oaks as well as a variety of plants associated with Garry oak meadows.

Just to the south of the wooden walkway that forms the lower boundary of this area is a beautiful example of a weeping Douglas-fir (Pseudotsuga menziesii).

See Native Trees and Native Plants for more information about these and other native species.